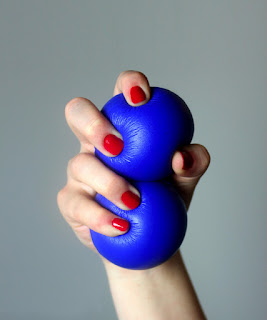 I have for some time now thought I should make a some sort of update, to explain a bit of my situation, and to clear up some questions people visiting my blog or Facebook page seem to have.

However, I am not "caged" and I do not wear a chastity belt. For me the main thrill is to stay chaste simply because I love my Queen, not because some piece of plastic or metal makes me do it. I could wank myself, but I do not, because I have made her a promise. Simple as that.

We have come to the conclusion the current arrangement suits us very well. I get constantly aroused by the fact I can't touch myself, and when we are together all attention my Queen gives mean so much more to me now. My Queen is in many ways the sole source of my enjoyment.

There is a lengthy history behind my chastity. The project begun way back in 2013, long before I had met my Queen. I had prior to that completed several chastity periods for various reasons, but it ended up being the longest, after the person in control lost interest in me.

In March of this year, when the day count was 500, I told about my project to my girlfriend, who was quite cool about the whole thing, and agreed taking the responsibility of controlling my orgasms from now on. Which my Queen has done, quite expertly.

During the last few months I have had couple of slip-ups while edging. There were a few close calls, a couple of ruined orgasms, and two produced by my Queen. All of them however took after March, meaning I was completely chaste way over a year, and during the year 2013 I didn't have a single orgasm. I have had four "discharges" in 2014 so far. That's four ejaculations in 22 months.

So no, even though we have dated for almost nine months now with my Queen, we haven't had sex. At least in terms of intercourse, that is. There are some medical concerns which I won't go into here, that have prevented us from doing so.

One issue that also comes up several times when talking to people is the fact I am impotent. There is no other way to put it, and I am quite comfortable using the term. It is caused at least partly by diabates.

I haven't been able to "get it up" way over a decade now, and my inability to perform more or less destroyed the sex life in my first relationship. My condition has also stopped me trying actively "to get some", so to speak, because I have considered there would be no point to it.

I get hard on mornings, and sometimes when I'm with my Queen, but it never lasts more that a few minutes. Viagra doesn't help, but Caverject does. However the latter is a bit extreme option, as well as being rather expensive and so far I haven't had any need for stiff cock.

At some point, when the situation demands it, I will make a trip to the pharmacy, but like I said, so far there hasn't been a need for it. And no, even though we haven't had sex, my Queen doesn't have "another man on the side", nor is she interested in interracial stuff. That stuff is very unknown here, due to cultural differences.