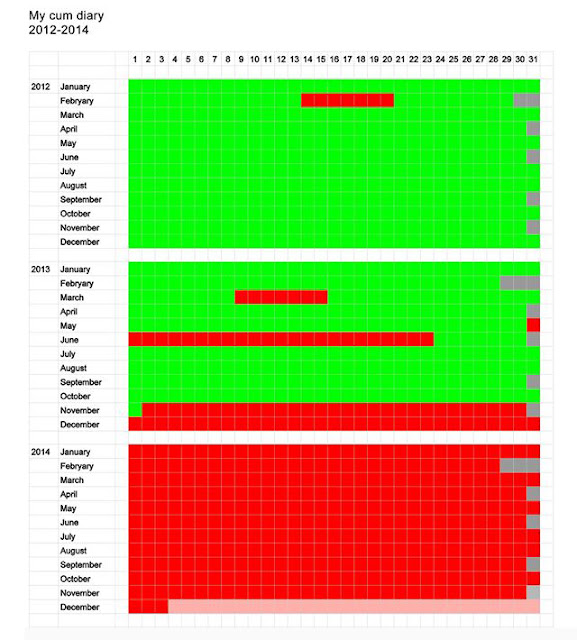 All of the posts on this blogs were originally written for and posted on my Facebook account. However, since one can never be sure with Facebook, and since I have put considerable amount of time in writing my updates, I decided to copy them as a separate blog as well.

I have decided to start this blog with an update from third of December, 2012. It more or less tells the story so far, so to speak. At time I already knew the woman I later started calling my Queen, but I had no idea where the story would take us. And neither did she.

The first, week long ban took place in February of 2012. It was set by a female friend of mine, who was kind enough to play with me a bit, and who I had the privilege of serving orally during one afternoon, just before she set the ban. It was a "punishment" for me (for causing us miss a bus). However, she was merely interested to see how obedient I would be.

The second week long ban, in March of 2013, was set by my girlfriend, with whom my relationship lasted only three months, but they were quite a memorable three months. That ban too was a punishment for me, but she admitted herself she merely wanted to make me suffer for her. Thanks to her continuous teasing online, it was quite tormenting and fun week.

Originally the ban was supposed to last only four days, but due to certain circumstances, it took a whole week before I got to ejaculate before her, on the exact minute she had chosen. That was the last time I got to do it in her presence, because only mere couple of weeks later she decided she wanted a change of pace in her life.

She loved the idea.

My reason wanting to continue was also the emptiness I felt after the three month long relationship. I have led quite a lonely life, and lost my virginity not until I was 33 years old, for example.

I don't look hideous, or at least I don't think I am, but reason for the lack of experiences are mainly bad self esteem and downright puzzlement when it comes the practices between men and women, the signals and secret codes they seem to use when hooking up.

Speaking to women doesn't cause me anxiety either. I like the company of women and they seem to like mine. I can make them laugh, even. But it's the next step, getting into their pants, to use a rude expression, is beyond my capabilities.

I've had two relationships in my life, and at both occasions it was me who got picked up, not vice versa. All in all I seem to be very bad at handling the social role of a man of our society, with the expectation of him doing the first move.

After our eventual break-up seven years later, in the end of 2010, I was convinced more than ever, that if sex was that, I didn't want anything to do with it. At that point I was 40 years old and had had sex with only one woman in my life.

However, two years later I met my second girlfriend. She was young, sexy, smart, pretty and rather uninhibited, in many ways the girl of my dreams. For the first time in my life having sex with someone was actually fun, even though most of the physical side of it was performing oral services for her, which she loved.

People often ask me how has it been like, and how have I made it this far, without a keyholder or a device of any kind. All in all this has been much easier than I could have believed a year ago. After one gets past the first 1-3 weeks, it gets easier very quickly. Almost too quickly, in my case one could say. Truth to tell, I would have liked this to be much harder than it has been.

One has simply to accept that fact that from there on the sole source of one’s sexual pleasure is the frustration, that has now become a part of you. And the desperation, as one realizes how much one is missing out on daily basis, as the rest of the world is having as much sex as they want.

Even though it wasn’t my intention to do it this long when I started my project, I think making that mental shift helped me very much.

Another question people usually have is why have I done it? Has there been benefits to it? I have done quite a lot of reading on the subject, and almost every time it is being described how male's behaviour changes as a result of the chastity, how he becomes more caring and affectionate towards his wife and so on.

I guess in my case the results might have been similar if I had had someone in my life. I do recognize there is a lot of pent up affection in me, but there hasn't been no one to express it towards to. So in my case that particular benefit doesn't apply.

One could even say there are no actual benefits in this, not in the way I described earlier. The main benefit I can see of is the perverse pleasure of denying myself something so fundamental and natural as sexual relief, for such a long time. In a way one could say this is some form of mental masochism.

In my case this has been more a personal journey, and exploration. Finding out things like how long I'm able continue this. How does my body or mind reacts after being denied of sexual relief for so long. At what point one's libido tries to shut itself off, and so on. However, at the moment I see no reason to stop.