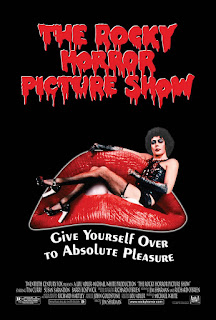 I got to spend couple of days with my Queen again. Unfortunately due to mother nature the encounter didn't include any orgasming (hers, that is) this time.

The weekend was also rather packed with stuff to do, among other things a shopping round to local antique bookstores and me and my Queen going to see stand-up comedy for the first time in both of our lives. We have now seen a gig of Ismo Leikola, the world's funniest man, apparently. (He has a diploma and all to prove it.)

The weekend included also another girlfriend test, of sorts. Namely, the Rocky Horror Picture Show. I said "of sorts", since we both are fans, but even though she has seen on stage productions, as have I, she hadn't ever seen the movie version.

Even though I'm not a real hard core fan I do know some audience participation lines by heart. My favorite one is to yell "Describe your testicles!" just as the Narrator is about to say "Black, heavy and pendulous". My Queen seemed to find that amusing as well. Making her laugh feels so good.
Posted by slaveboy071 at 5:33 PM